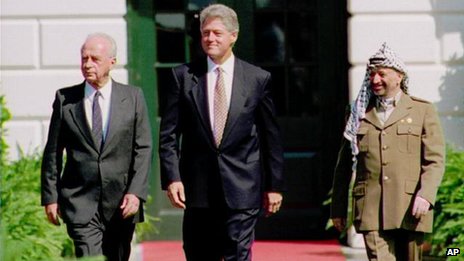 It ought to feel like a moment of optimism in the long and tortured history of negotiations between Israel and the Palestinians, but somehow it does not.

It is always easier to see the problems than the opportunities in this part of the Middle East of course – but this time around it is hard to find anyone who thinks a dramatic breakthrough is within reach.

The talk all along has been more of avoiding a breakdown than hoping for a breakthrough.

And that was before Israel’s Construction Minister Uri Ariel announced the final go-ahead for new building in East Jerusalem and on the West Bank.

Palestinians were outraged. These are precisely the kind of projects on the land which Israel captured in the war of 1967 which they regard as a deliberate attempt to choke off the chance for them to build their own state. Most countries view such building as a clear breach of international law, although Israel does not.

Many Palestinians saw the timing of the announcement as a cynical attempt to scupper the talks, but even before then it looked as though the resumption of negotiations came about mainly – if not entirely – as the result of pressure from the United States and not through any strong impetus towards talks on either side.

This was not always the way.

It is almost exactly 20 years since the then US President Bill Clinton brought the Israeli Prime Minister Yitzhak Rabin together with the Palestinian leader Yasser Arafat to sign an agreement based on extraordinary secret negotiations in the Norwegian capital Oslo.

The president called it “the dawn of a new era for the Middle East and the entire world” and issued a stirring call for their achievement to act as a catalyst for the rest of the peace process.

The truth is that today’s negotiators are taking a few steps down a road along which their predecessors travelled rather further.

Back then, the prisoner releases were larger too.

In the heady days of the mid-1990s Israel released, in stages, 4,000 Palestinian prisoners.

This time around it proposes to release 104 over a nine-month period with the first 26 set free in the middle of this week.

Palestinians see the gesture as inadequate, arguing that it relates only to a small group of men, some of whom were anyway nearing the end of their sentences. And they feel they should have been consulted about who was released.

But many Israelis see the release as far too big a concession.

One cabinet minister has warned it could be interpreted as a sign of weakness in the Middle East but the strongest opposition has come from families of Israeli victims of political violence.

Oded Karamani’s brother Ronen, for example, was murdered in 1990.

He was abducted by a Palestinian gang and was missing for three agonising days. When his body was found his hands had been tied behind his back. He had been repeatedly stabbed while he was helpless until he died.

Oded showed us the family albums that record every detail of the smiling Ronen’s short life.

“My parents,” he told me, “from the outside you can see that they’re alive – they have children and grandchildren – but inside from the second it happened they’ve been dead.”

His message is simple: “Don’t let [the Palestinian prisoners] out to educate another generation of terrorists,” he said. “I’m begging our government… please don’t let them out.”

The prisoner issue is a central one for both sides and all the core issues of justice and identity and history and morality are bound up in it.

To many Palestinians, the prisoners are heroes – fighters in a just cause.

I went to Ramallah to meet one of the men freed during the Oslo prisoner releases.

Abdel al-Anani works for Palestinian prisoners’ rights these days – he was convicted of ordering the death of someone accused of being an Israeli informer.

He wants peace, he told me. As he put it: “In the end it’s the Israelis and the Palestinians who are going to live side by side. If they don’t realise this, the whole conflict will keep going and the peace process will fail.”

It does not feel in the Middle East as though the moment has come when either of the two sides is preparing to make the full payment for a final peace. Anyone who knows the region can rattle off the familiar list of issues from the status of Jerusalem and Israel’s right to live in security to settlement construction and the rights of Palestinian refugees.

There are still plenty of issues that divide the two sides – but they are at least now talking about them.