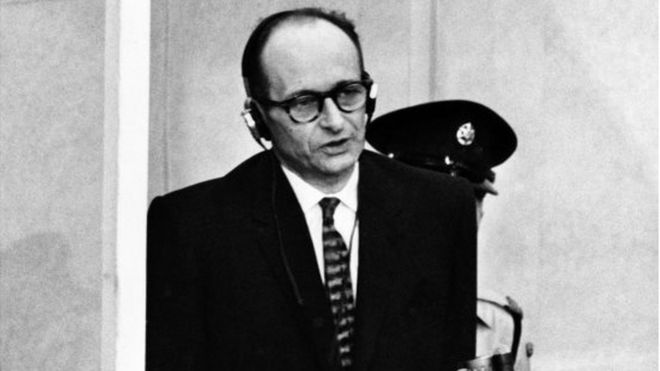 Adolf Eichmann, an architect of the Nazi Holocaust, protested his innocence in a final plea against his death sentence, newly released papers show.

Eichmann told Israel’s president that he had only followed orders and was not responsible for “the unspeakable horrors” carried out against Jews.

Six million Jews were murdered by the Nazis during World War Two.

Israel released the papers on Holocaust Remembrance Day. Eichmann was convicted in Jerusalem and hanged in 1962.

Marking the publication of the hand-written documents, Israeli President Reuven Rivlin said: “Not a moment of kindness was given to those who suffered Eichmann’s evil – for them this evil was never banal, it was painful, it was palpable.

“He murdered whole families and desecrated a nation. Evil had a face, a voice. And the judgement against this evil was just.”

The papers reveal that Eichmann believed the Israeli judges who oversaw his trial had “made a fundamental mistake in that they are not able to empathise with the time and situation in which I found myself during the war years”.

He attempted to absolve himself of blame, telling Israel’s then-President Yitzhak Ben-Zvi: “It is not true… that I myself was a persecutor in the pursuit of the Jews… but only ever acted ‘by order of’.”

Eichmann, who played a key role in the 1942 Wannsee Conference at which the Nazis’ annihilation of European Jewry was planned, spoke in his appeal of the “unspeakable horrors which I witnessed”.

“I detest as the greatest of crimes the horrors which were perpetrated against the Jews and think it right that the initiators of these terrible deeds will stand trial before the law now and in the future,” he wrote.

However, he added: “I was not a responsible leader, and as such do not feel myself guilty.”

Eichmann was captured by Israeli intelligence agents in 1960 in Argentina, where he was living as a fugitive, and smuggled to Israel, which put him on trial.

His plea for clemency was rejected and he was hanged in Ramle prison.