Residents in Gaza are using a 12-hour humanitarian truce to return to their homes, gather essential supplies and search for those trapped in the rubble. At least 85 bodies have been pulled from the rubble during the truce, a Palestinian health official says, the spokesman said. Thirty-nine Israelis have died. International talks on a longer truce have resumed in Paris.

Israel said it would continue to “locate and neutralise” Hamas tunnels during the pause, which began at 08:00 local time (05:00 GMT).

So far 31 tunnels have been discovered, with about half destroyed, Israeli’s military says.

In the district of Shejaiya, residents started flooding back from 08:00, despite warnings not to do so.

The scene here is just astonishing – the most widespread destruction: buildings completely pulverised, cars thrown 50m (160ft) into the air on top of buildings, the facades of some block of flats completely ripped off.

The air is pretty thick with the stench of death as people try to recover bodies and belongings.

In the background I can hear a crackle of gunfire. Although a humanitarian ceasefire is in place, clearly people are still shooting. There is an Israeli drone flying overhead, and we’ve heard the sound of fighter jets.

US Secretary of State John Kerry met the foreign ministers of Turkey, Qatar and some European countries in Paris on Saturday in the hopes of agreeing a longer ceasefire.

Mr Kerry spent a week in the Middle East attempting to broker a deal before leaving Egypt on Friday. 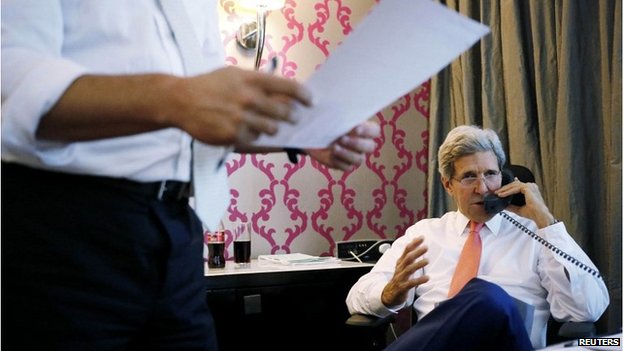 US Secretary of State John Kerry has been leading efforts to secure a ceasefire
Jump media player
Media player help
Out of media player. Press enter to return or tab to continue.

Hamas insists that any ceasefire should include a lifting of the blockade imposed on Gaza by Israel and Egypt since 2007.

“The people of Gaza are not our enemy, our enemy are the people shooting those rockets into Israeli cities,” Mr Regev told the BBC.

Israel is reported to want to continue operations against Hamas infiltration tunnels once direct conflict ends.

The 12-hour truce was agreed overnight, although the Israel Defense Forces (IDF) vowed to respond if attacked.