Ariel Sharon was known as The Bulldozer: a larger-than-life, blustering figure who came to dominate the domestic political scene as much by his sheer physical presence as by his rhetoric.

To many Israelis, Sharon was a heroic warrior, having led decisive campaigns in the 1967 and 1973 wars.

But to many Palestinians he was The Butcher, who laid siege to Beirut and was responsible for the deaths of at least 800 civilians in the Sabra and Shatila refugee camps in Lebanon in 1982.

“No-one can lecture me about the need for peace,” he once said. “I am the one who was in those battles. Therefore I am the person who can prevent war.” And it is true that Sharon had fought in all of Israel’s five wars.

Late in his career, Sharon pushed through disengagement from Gaza against strong opposition in Israel and from the party he led.

This policy was an attempt to define, on Israeli terms, the borders of the state and provide security for Israel, even before a final settlement with the Palestinians.

Sharon was born Ariel Scheinerman in the Sharon Valley in 1928, in a Palestine still under a British mandate. His parents, Shmuel and Devorah, were farmers – Zionist emigres from Russia.

The family farm was often subjected to raids by neighbouring Arab tribesmen. Sharon learned how to fight at an early age.

It is said that, as a child, he would bury the family rifle under dung in the cowshed when British patrols passed by. At high school in Tel Aviv he studied agriculture, politics and military affairs, while also learning to be a teenage warrior.

Aged just 14, the young Sharon joined the Haganah, the underground Jewish military organisation which was the forerunner of the Israeli army.

Sharon, at one point badly wounded in the stomach in the ensuing war, led from the front, often in an armoured car liberally stocked with vodka and caviar for his men to share.

In 1953, while a military intelligence officer, he founded the commando Unit 101, charged with raiding the West Bank – then under Jordanian occupation – in retaliation for attacks on Israel.

One raid, on the border village of Qibya, ended in shame for Sharon. His men, who had been instructed to blow up 10 homes in retaliation for a raid on Israel which had killed three people, demolished 45 houses and a school and killed 69 people.

The international furore forced the then Israeli Prime Minister, David Ben-Gurion, publicly to apologise for his troops’ excesses.

Even so, Sharon’s career went from strength to strength. October 1956 saw Israeli armour spearhead an attack into Egyptian territory on the Sinai peninsula, in support of the British and French attacks on Suez.

Ariel Sharon was once again in the vanguard, in charge of a parachute brigade which captured the strategically-crucial Mitla Pass.

This bloody battle was condemned even by the army’s Chief of Staff, Moshe Dayan, as unnecessarily brutal.

After a spell studying military theory at the British Army’s Staff College at Camberley, the newly-promoted Colonel Sharon returned to Israel where, for three years, he ran the army’s infantry school. 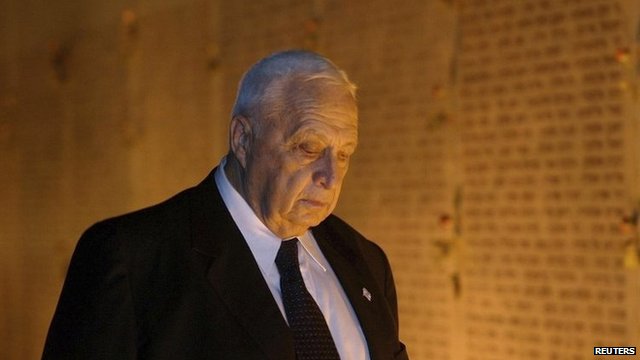 He was back in action in the 1967 war, commanding an armoured division when Israel’s armed forces launched a pre-emptive strike on its Arab neighbours.

He recaptured the Mitla Pass and the route to the Suez Canal, cementing a reputation as a brilliant strategist. His troops however were accused of shooting their Egyptian prisoners but Sharon denied any knowledge of these alleged atrocities.

Frustrated in his ambition to become chief of staff, Sharon resigned from the Israeli army in June 1972 to pursue a career in public life.

But his promising political career – he formed the Likud party shortly after leaving the army – was put on hold when he was recalled to active service following Egypt and Syria’s surprise attack on Israel in October 1973.

Once again in charge of an armoured division, he spearheaded Israel’s counter-attack, crashing through the Egyptian lines to reach, and cross, the Suez Canal again before being ordered by his superiors to advance no further.

Israel’s failure, as he saw it, to finish the job by destroying Egypt’s armed forces, was a huge mistake. He called it “an undecided war”. 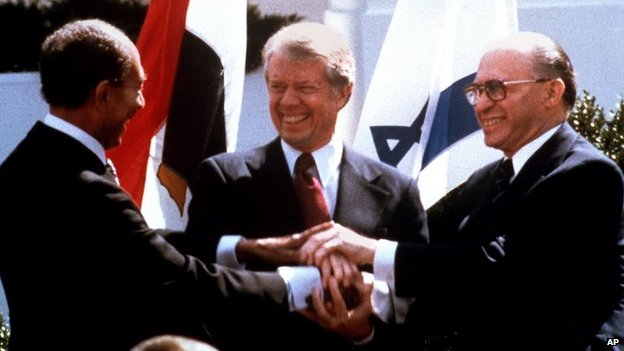 His army career over, Sharon now devoted his life to politics. December 1973 saw him elected to Israel’s parliament, the Knesset, as a Likud member.

During the mid-1970s he served as defence adviser to Prime Minister Yitzhak Rabin before being appointed minister of agriculture by Rabin’s successor, Menachem Begin, in 1977.

He greatly expanded the ministry’s remit, dealing with rural matters but also developing a plan for permanent Jewish settlements in the territories occupied by Israel in 1967.

“I believe that if we establish these settlements,” he said at the time, “we will feel sufficiently secure to accept risks for the sake of peace.”

He opposed the Camp David peace accord thrashed out by Begin and Presidents Carter and Sadat, believing that the guidelines on future Palestinian autonomy were too vague.

But he remained, and prospered, in the Israeli government. Promoted to defence minister, Ariel Sharon was still to face the most controversial moment of his career.

In June 1982, he ordered an invasion of Lebanon, Israel’s northern neighbour, to push back Palestine Liberation Organisation (PLO) fighters who were based there.

manding an infantry company when Israel came into being.

After two months, 14,000 PLO and Syrian fighters agreed to leave Beirut. But tens of thousands of Palestinians remained behind, crammed into refugee camps such as Sabra and Shatila in Beirut.

Breaking a promise he had given to the Americans, Sharon sent his troops into West Beirut, saying that 2,000 PLO fighters were hiding in the camps.

However he made the fateful decision to let the PLO’s foe, the Phalangist Christian militia, go in.

Added to this, the Phalange’s former leader, Lebanon’s President-elect, Bashir Gemayel, had been assassinated the day before.

In the massacre which followed at least 800 – though figures of up to 2,000 have been mooted – Palestinian refugees died and many others were raped and tortured.

Worldwide condemnation followed – 400,000 people took part in the largest demonstration ever seen in Israel. Sharon was called a murderer.

But he refused to resign from the government and Begin demoted him to minister without portfolio.

The following year an Israeli commission of inquiry ruled that he carried personal responsibility for failing to prevent the massacre in the camps. 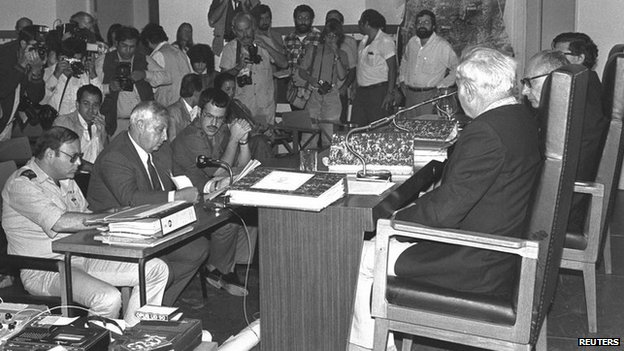 Sharon refused to accept any responsibility for the tragedy. “Not for a moment did we imagine that they would do what they did,” he protested.

“They [the Phalange] had received harsh and clear warnings. Had we for one moment imagined that something like this would happen we would never have let them into the camp.”

But the Kahan commission concluded that he “disregarded the danger” and recommended that he resign from office.

Sharon’s career suffered after Lebanon and he remained in the background of Israeli politics, running a number of ministries but not scaling the heights he had previously enjoyed.

That is, until Likud’s 1999 election defeat. Unexpectedly, the party chose Sharon to succeed its former leader, Benjamin Netanyahu.

He swept into power in 2001, six months after the beginning of the second Palestinian uprising, or intifada, which began when Sharon paid a controversial visit to the the holy site in Jerusalem known as the Temple Mount to Jews, and Haram al-Sharif to Muslims.

He was elected, like so many of his predecessors, on a promise of peace and security for Israelis, but he struggled to achieve that illusive goal. 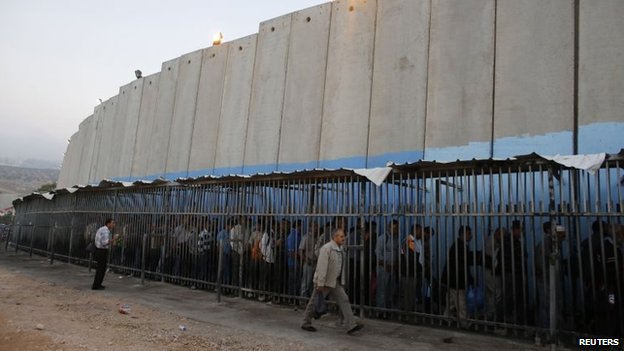 Sharon ordered the West bank barrier to be built after waves of deadly attacks by Palestinian militants, but it has been seen as a device to take land

Sharon looked to unilateral measures – the building of a barrier in the West Bank after scores of deadly attacks by Palestinian militants and pulling settlers and troops out of the Gaza Strip and a small area of the West Bank.

But the West Bank barrier – built on occupied land – was unacceptable to the international community. The Gaza disengagement plan had his own constituency, the settlers and the hard right, accusing him of weakness and betrayal.

Tired of the opposition from within his own party over the withdrawal, in November 2005 he resigned from Likud to form a new centrist party, Kadima – “forward” in Hebrew.

The idea was to give himself more room for manoeuvre in seeking a peace deal with the Palestinians.

What this would have achieved will now never be known.

In December 2005, Sharon suffered a mild stroke. A second, major stroke in January 2006 sent Israel’s warrior into a coma from which he never awoke.